Starting Your Career in Software Engineering 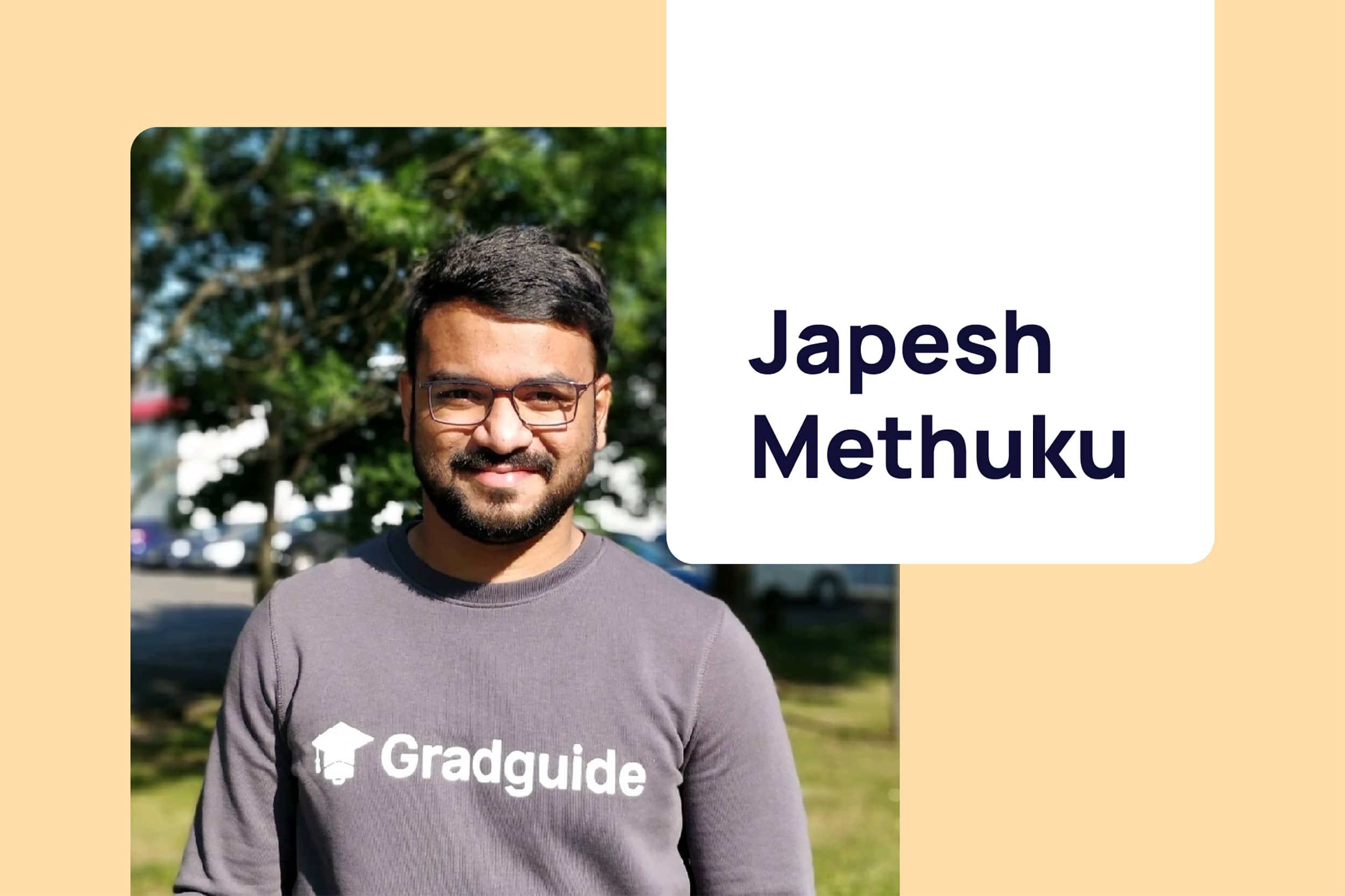 My name is Japesh and I am a Junior Software Engineer at Gradguide. This blog is not intended to promote my company; rather, it is an attempt to tell you a little bit about my journey and show students how they can set themselves apart when they’re searching for a job.

When I enrolled for my Masters degree at Dublin City University in September 2019, like many others, I did not expect that only a few months later a pandemic would come along that would disrupt the employment market and my subsequent chances of finding a graduate job.

Fast forward to March 2020, there was a module in the second semester of my degree called ‘Entrepreneurship for Engineers’ where we were tasked with preparing a business plan for a fictional business. While I saw my friends building plans for FinTech, AI and crypto companies, I was clueless about where to start.

At this stage, I had already started the process of applying for jobs with my research primarily focusing on how to answer common interview questions and how to approach technical assessments.

While doing this, I realised that nothing has changed in the way a student searches for a job straight out of college. Students were still applying for a countless number of jobs and preparing numerous versions of their CV without knowing what exactly needs to be included.

This is when I had the idea to prepare a business plan for an imaginary company that offers free mentorship for students and graduates from people who had been successful in their chosen career path.

A combination of being so busy with my coursework towards the end of my degree and being offered an 8-month contract as a Research Assistant in DCU upon graduation meant that I couldn't pursue my business idea at the time.

However, in June 2021, I was back in the same position I'd been when I first graduated. Attempting to find an answer to the same old question - when will I get a job? But this time, I went in a completely different direction than I had in the past.

While there is no doubt that LinkedIn is an excellent tool for your job search, you first need to consider the magnitude of its reach, with typically 1000+ applicants for Software Development Engineer roles in FAANG firms.

Even the sheer volume of applicants made me nervous, as I knew that the interview process would be extremely competitive. This is when I made the decision to start searching for a company that offered something similar to what I had imagined in my business plan.

I came across a lot of companies that were close to what I was looking for but there was one in particular that stood out - Gradguide. I wanted to be part of this company because I knew that they were solving a problem that graduates everywhere experience. Graduating from college and not knowing where to turn next.

Gradguide offers a mentorship program for students and recent graduates who want to get into the tech industry. The idea being that when a student has a mentor to guide them through the application and interview process, they greatly increase their chances of success.

Having researched the value of mentorship for my business plan I understood it was important that I first become a mentee. Gradguide used to run the mentorship programme on a monthly cohort basis so it ended up taking until my fifth attempt until I was accepted. I quickly completed all of the workshops and connected with my mentor whose advice completely changed my perception of the tech industry.

Having finished the mentorship program, I made the unusual decision of reaching out to the management team to give them some feedback of what I thought of their company. I wasted no time in chatting with the Head of Operations, Dave Martin about my business plan and how I could fit into their software engineering team.

Thankfully, I was welcomed with a positive response and was asked to present my plan to the CEO, Mark Hughes, and Head of Product, Hugh Allen. This proved to be very challenging for me as I tried to align my plan with Gradguide’s business model. When I presented it, I realized that the management not only appreciated my efforts in connecting the business plan with the roadmap, but also recognised the time spent researching how they could scale it even further.

After a few days, the team got back to me to inform me that the next part of the process was a technical assessment. The task was to work on developing a web application using the MERN (MongoDB ExpressJS React Node) stack.

While this was a tech stack that I was unfamiliar with, I saw this as a great opportunity to work on something that I had only dreamt about until then. I spent the next four weeks teaching myself with these technologies and how they could be connected to the web application. In September 2021, I joined the software engineering team at Gradguide as an intern which eventually was converted to a full-time position in November.

So far, the journey has been very rewarding, exciting and challenging. We are already developing version 2 of our eLearning, mentorship and graduate recruitment platform that was released in December 2021 with the release of the mobile application soon to follow. I truly believe that Gradguide’s tech is not only tech for good but tech of the future.